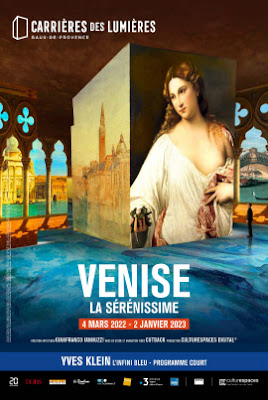 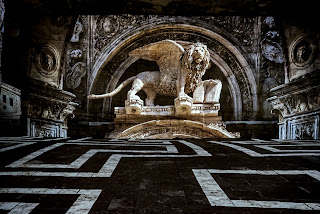 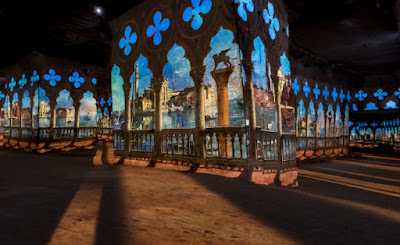 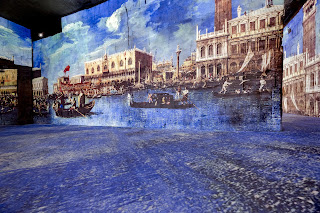 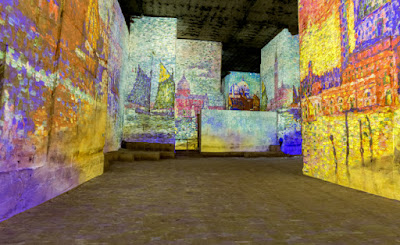 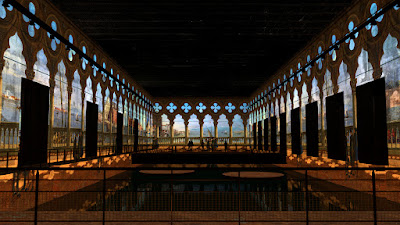 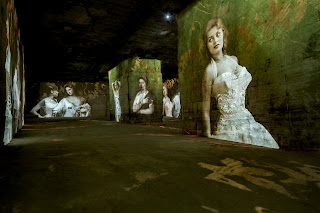 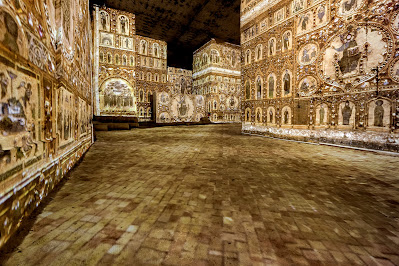 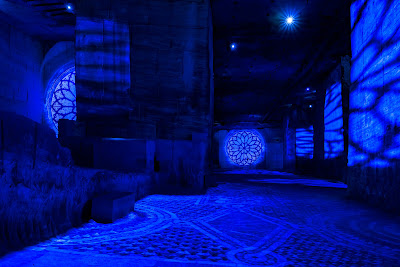 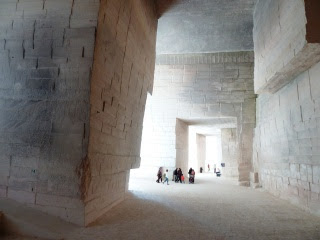 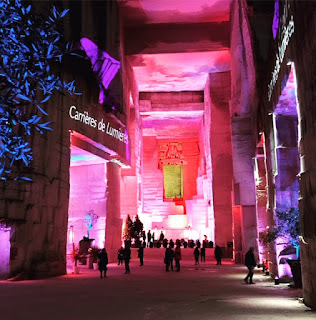 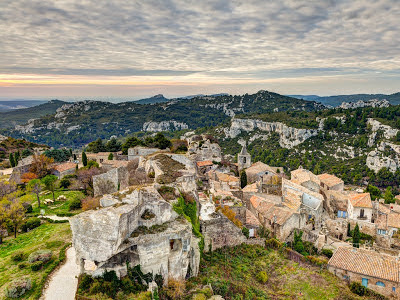 The Carrières des Lumières (Quarries of Light) is a magical space in a vast cave-like quarry at the base of the hilltop village of Les Baux de Provence. There in the cool darkness, 100 video projectors splash 2,000 still and moving images over an area of more than 75,000 square feet, onto the 45-f00t-high walls and onto the stone floor, while 74 speakers provide the perfectly choreographed soundtrack to what you’re seeing.  The sound-and-light show changes once a year and is one of the most-popular, most-visited sites in Provence.

On March 4, the Carrières launched its new immersive exhibition for 2022. Called Venise La Sérénissime, it explores the artistic and architectural treasures of the gorgeous Italian city.  Traveling through the Grand Canal, lanes, squares, buildings and churches, you’ll be transported into the world of Venice—both holy and secular—and see all the symbols of the city’s extraordinary history. Expect to be immersed in Byzantine art and the impressive golden mosaics of Saint Mark’s Basilica, the masterpieces of Tintoretto, Bellini, and Canaletto, and the famous Mostra del Cinema, through photos of the actresses and actors of Italian neorealist films.

The 40-minute show is set to the music of Vivaldi, Verdi, Albinoni, Handel and Paganini. I’ve always felt that the soundtrack plays a large part in the impact of show. People around here still talk about the brilliant pairing of Salvador Dali and Pink Floyd in 2020...loved it!

As in years past the 2022 program was created by Gianfranco Iannuzzi and produced by Culturespaces Digital.

Also as in years past, there’s also a shorter, second program. This year it’s Yves Klein: Infinite Blue, focused on the work of the 20th-century, Nice-born artist (the son of two painters) who was inspired deeply throughout his career by the colors of the Mediterranean. The ten-minute Klein show is set to Mozart, Vivaldi, Thylacine and Brian Eno. (More about Klein is here and here.)

The two shows combined last about 50 minutes and run on a continuous loop. Both are on view until January 2, 2023.

The Carrières de Lumières sits in the Val d’Enfer, a stone's throw Les Baux itself; you can easily walk between them but on foot you have a bit of a climb up to the village itself.  These quarries produced the white limestone used for the construction of the village of Les Baux, the Château des Baux and many buildings in surrounding villages including St. Remy. Aluminum ore bauxite was discovered here in 1821 by geologist Pierre Berthier, who named it after the village. In 1935, the use of more-modern materials led to the quarries' demise.

Dramatic and otherworldly looking, the area has inspired artists of all sorts; it provided the setting for Dante’s Divine Comedy and Gounod created his opera Mireille here. Later, Cocteau came here to film The Testament of Orpheus.  A 16-minute film tracing Cocteau’s life can be seen in the Salle Cocteau, adjacent to the main space.

The Carrières du Val d’Enfer have been awarded Natural Monument status in France.

The first transformation of the abandoned quarries began in 1976 with the development of a project using the huge rocky walls for sound and light performances.

Formerly known as the Cathedrale des Images, the venue closed in 2011 and re-opened (after a €2 million re-do) as the Carrières de Lumières the following year. Since then, it’s been managed by Culturespaces. Founded by Bruno Monnier in 1990, Culturespaces is the leading private operator/manager of monuments, museums and art centers in France. The Culturespaces Foundation, founded in 2009, fosters access to art and culture for children affected by illness, disability or poverty. One of France’s benchmark foundations, it’s known for initiatives that blend culture, education and solidarity.

For a look at all the Carrieres shows since 2016, click here.

A full press kit in English is here.

If you’ve never been to the Carrieres des Lumières, you wander at leisure around the dark, cool indoor space. The stone floors are somewhat uneven so if you’re unsteady, bring a cane or walking stick. There are stone benches for those who want them and you can stay as long as you like. As you exit, there’s a small but interesting shop selling books and other items pertaining to the history of Provence, Les Baux, the Carrières and the Val d’Infer.

The Cafe des Carrières is open from 10 am daily, closing at 5:30, 6 pm or 6:30 depending on the season, serving drinks, sandwiches and sweets.

As in years past, you can just show up at the Carrières and buy a ticket. But to avoid long lines in season, they suggest you boook online here.  You can also buy tickets in advance at the Carrières ticket office or at all FNAC stores. Pricing for 2022 is: €14.50 (adults), €13.50 seniors (65 and up), €12 students and free for journalists, jobseekers, the disabled and kids under 7. On the website you’ll see family rates and combined-visit prices (for the Carrières, the Chateau des Baux and the Musée Yves Brayer), along with background, directions and much more.

Open seven days a week; last entry is one hour before closing.

Route de Maillane
13520 Les Baux de Provence
Tel: +33 (0)4  90 49 20 02
carrieres-lumieres.com
Photos: (1) Poster for the new show. (2-10) Eight images of Venice in the immersive exhibit inside the quarry. As you can imagine it's hard to convey photographically what you'll see there in the cool, rocky darkness...but these should give you a pretty good idea. (11) One image from the Yves Klein show, which follows the Venice show on a continuous loop. (12)  The old bauxite quarry in daylight; the geologist who first discovered aluminum ore here named it after the village. (13) One section of the vast space is lit beautifully when the Carrieres hosts private parties and other events. I took this photo at the launch party for the new show a few years ago. (14) One of my favorite photos of the village of Les Baux, taken by Philippe Clairo.
Julie Mautner at 3:27 PM
Share